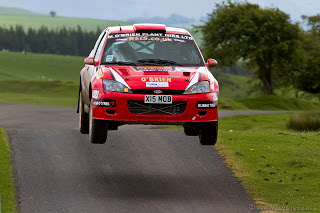 The Severn valley national stages was the fourth round of the welsh national forestry rally championship. Taking place over some of the classic rally GB stages Crychan, Halfway and the infamous route 60, both Michael and Daniel couldn’t help but go for a very late entry. And by late, it was 2 days before the rally.

Finding last minute Co Drivers also, which was not an easy task as there were several other rallys on this same weekend, Andrew Roughead stepped in to navigate Dan and the experienced Brian Cammack to navigate Michael. This wouldnt be the only new thing for Michael to get used to this weekend, he would also be using an 02 spec focus something Michael hasnt driven since 2008. 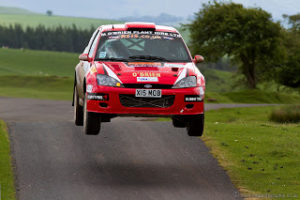 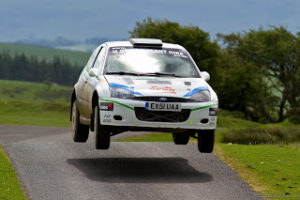 The opening stage through Crychan south Saw Michael setting the fourth fastest time overall and Dan 6th. At the end of the stage Michael reported going out with too soft a tire meaning the tires weren’t going to last the full length of the mornings loop. A quick emergency service in the management where the medium Kumho tires were put on the car seen an improvement in times over the next 3 stages, with Michael climbing to 3rd and Daniel to 5th.

The remainder of the stages saw Michael maintain position, whilst Dan struggled with the next two stages after an intercooler pipe came loose leaving the crew with no power. Dan and Andrew managed to repair the pipe using some make shift parts from other areas of the car to set the 3rd fastest time through the final route 60 stage just 3 seconds from the fastest time.
Michael wouldn’t be so lucky in the last stage however, clipping a rock at high speed taking the front corner of the 02 focus leaving them limp to the finish of the stage and unable to get back to the finish ramp.

This promoted Dan up to 4th Overall in the rally giving him highest placed junior awards both in the rally and in the Welsh national championship.

Dan now leads the Welsh junior championship after 4 rounds with only 2 rounds started.