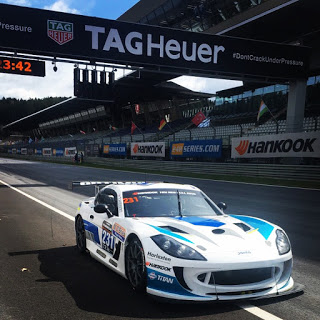 Optimum Motorsport vowed to bounce back this weekend (7-8 April, 2017) as the Creventic 24H Series reconvened for the third round of the championship – the 12H Red Bull Ring – and did so with pole position and then a hard-earned podium position at the Austrian circuit.

Featuring the same driver line-up as last time out in Mugello; Ade Barwick, Dan O’Brien and Tom Hibbert were once again at the wheel of the #231 Ginetta G55 GT4 in the SP3-GT4 class and it proved to be a tough race for the British team, which ultimately yielded a third-place finish.

“That was one tough race for us,” stated Team Principal Shaun Goff. “We really had to work for that result with our rivals seeming happy to run into us on numerous occasions. We spent a lot of time in the pits – we lost 28 laps in two incidents and we are 22 laps behind the leader – and that took away any chance of the class win, but we fought on for third position.

“With our closest rival not competing this weekend, we managed to turn a three-point deficit into an eight-point advantage in the championship and while the (race-winning) #233 made some gains, it was still a good result for us. Credit to the team who have worked so hard to firstly get the car out for this race, and secondly, for putting it back together again during the race!”

Qualifying saw Hibbert put in a great lap to claim the class pole position, 26th overall and he took the first stint, running comfortably in third position before handing over to O’Brien. Things took a turn for the worse 75-minutes into the race on lap 41 as the #109 Audi made contact with the Ginetta at the sharp Remus hairpin, the Audi sustaining front left damage, the Ginetta right rear suspension damage.

The #231 Ginetta was craned onto a flatbed truck and duly returned to the Optimum Motorsport pits for repairs. Very much a case of déjà vu, the team made swift repairs as the racing continued and re-joined the event less than 30 minutes later. Finally, a little luck finally fell the way of the team, with rivals’ suffering mechanical misfortunes and this promoted O’Brien to third in class, albeit 12 laps behind the leading KTM with the first phase of the race complete.

Saturday’s restart saw Barwick quickly catch and pass the second-placed Saker. However, soon afterward the Saker struck the Ginetta forcing a return to the pits with front left suspension damage. Once again, the Optimum team got to work and having lost multiple laps were back out. With attrition playing its role, the #231 Optimum Ginetta worked its way back into third, position, a place it would hold to the end of the gruelling 12H event.

“I love the series, but driving standards have been bloody awful,” Barwick said. “Dan got hit, I got hit. There’s been a lot of talk about brakes today but we can feel ours going off, but we still have brakes. It’s been a war… but in saying that, I’m still looking forward to Paul Ricard!”