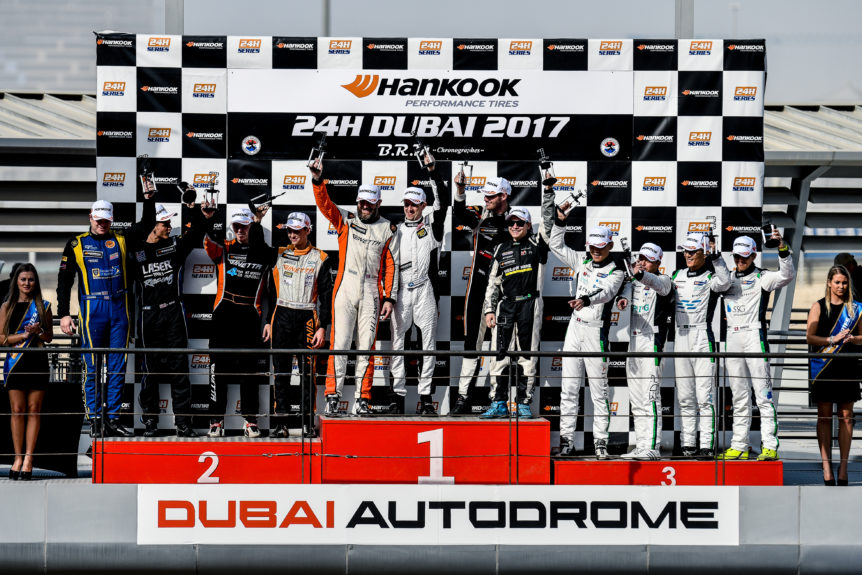 The Ginetta G55 battled at the front from the start of the race, after serving a 4 minute penalty in the pits for a start of race infringrment the drivers knuckled down and after a few hours of pushing they took the lead with Dan at the wheel just before midnight.

A further push saw the crew extend their lead every few hours and finsihed a comfortable 7 laps ahead of the next SP3 Class car. A faultless performance from all 4 drivers and a car that didnt miss a bit was the right recipe for a win in the 20 entry strong SP3 class and an impressive 26th overall in the 100 strong field.

“I’m delighted to have three wins in six attempts in the GT4 class,” stated Team Principal Shaun Goff. “Big thanks to all the drivers and support team for their time during the weekend.”

“A massive team effort and the car didn’t disappoint,” Moore summarised. “Thanks to all the boys from Optimum team, great effort, I’m over the moon.”

Dan O’Brien was also happy with the end result, even if a bit frustrated with the penalty.  “The race was very good, we overcame an early penalty as opposed to what happened last year, when we dropped to the back right at the end. So, it’s nice to be able to do it the right way around this time! We had a big push through the night to get the lead and build a gap, and then the morning was about keeping the gap.”

Stewart Linn was keen to praise both the team and his teammates. “It’s great how the car has coped with the conditions, and the team has done a top job too at keeping the race going smoothly, it’s being absolutely fabulous. The other drivers have been fantastic, I was focusing on bringing the car in one piece after my stints and everyone else has done the same, we worked great as a team.

“Our strategy as a team, driving the car at approximately the 90-95% of its potential instead of going flat out for fast laps has definitely helped us in the long run achieving the win. Will specially, has been under a lot of pressure, but he did a stellar job!”

Having kicked the 2017 season off on such a positive frame, Optimum Motorsport will now focus on the season ahead and look forward to the next round of the Series in Mugello, Italy.